How to Deal with Low Morale 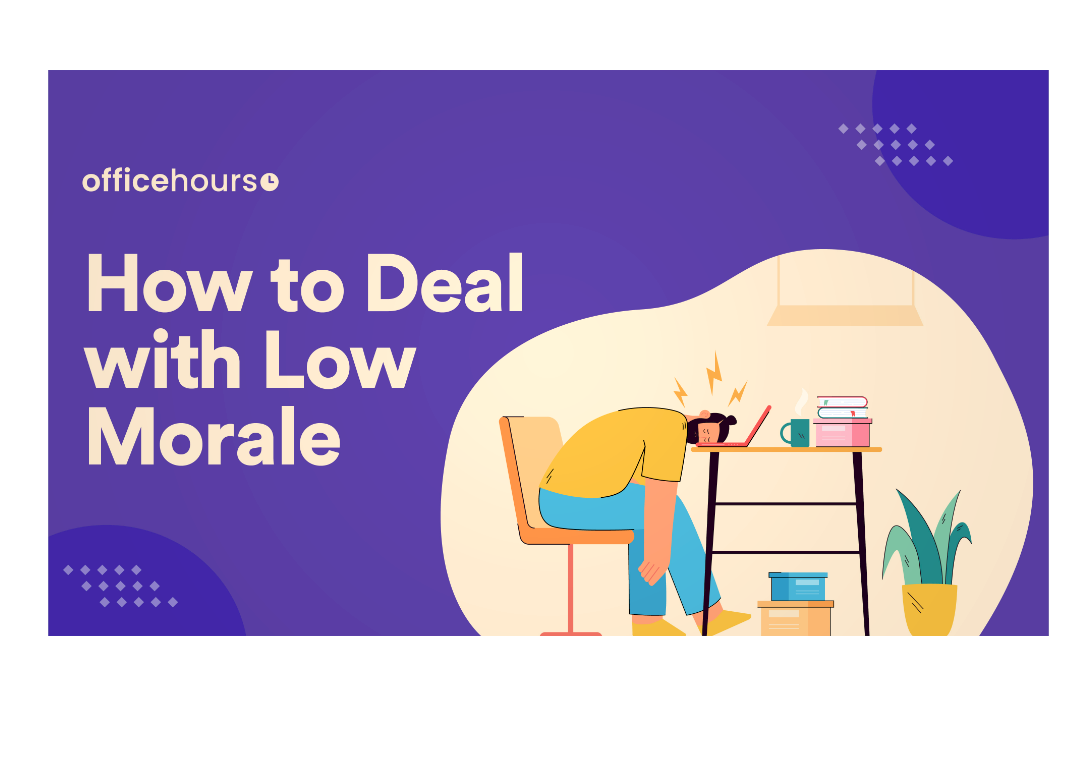 How to Deal with Low Morale

There are moments where we believe that either it isn’t worth it or that we can’t do it. I’ve had many of those moments, normally at 2AM after staring at some cocktail mix of rejections, difficulties, and the shadows of someone else.

Other times these moments are signs that we just need to forge on, at the risk of forfeiting our greatest opportunities: it was after getting rejected by multiple firms that I (and many friends who experienced the same thing) get into a top-tier shop; it was after getting put on probation at work that many people (including myself) became seen as star performers; it was after staying true to the path I’ve chosen that I’ve been able to become comfortable and actually happy with the track that I’m on, even if alternatives exist and other people are running at a different pace.

The trouble is that it’s hard to tell the difference (and sometimes, you need to do both: make a change in order to successfully forge on). If you’re like me, then you blame yourself for everything and then deal with the voice in your head chanting that “you’re not good enough”. You also stare at a screen at 2AM, wondering why you’re even doing this… is this worth it? I mean, can’t I just open an Amazon FBA business like the TikTok-ers, make all the hard go away, and sail into the sunset (especially if I’m destined to fail at my current career, anyway)?

So how do you deal with low morale?

I and no one can tell you exactly how you should handle them without having spoken with you and understanding your exact situation and where your head’s at, but hopefully the tactics below and the stories that come with them can be of some help.

It was 8PM on day 2 of on-cycle. I had faced rejections from four firms already and was crying to a friend “I can’t handle this anymore, I’ll just do off-cycle or try again next year… do I even really want to do PE, anyway?”

It was on day 3 that I interviewed with the firm that would end up giving me an offer, a firm that I’m very happy with, but I wouldn’t have gotten to that day or performed well on that day without my friends (note, multiple of them) to help me.

One friend reminded me of all the days I excitedly told him about my prep and the firms I wanted to go to. He saw my desperation but also saw through it, helping me see what temporary pain was clouding.

Another friend didn’t remind me of anything, he just let me cry after each rejection and gave me the outlet that I needed to get back on my feet before the next interview.

A third friend (and coach) didn’t care how I felt; he knew it was game time and he made that clear to me. “I know this is hard, but you’ve been preparing for 4 months. You slipped. So what? If you sound in your interviews the way you sound now, then it’s no wonder you didn’t get the offers. Don’t let the first failure mess up all your other chances. Raise your chin, smile, and perform.”

I needed all three perspectives, but more importantly, I needed it to come from someone else who could see more clearly than I could in that moment.

Even if you look at the two tactics that come after this, they both involve many stories of speaking to friends, mentors, and coaches for solace and advice, despite the tactics themselves involving the work that you have to do to get through the lows.

Rally the people who are willing to see clearly for you. They’re a text away. And they want you to reach out (wouldn’t you if your friend was going through hell).

2. Embrace and Learn from the Suck

I could cry all I wanted and ask for as many people to help as I wanted, but nothing would change the fact that I was on probation. My friend, too.

We didn’t think it was fair and we protested, but probation is probation, and we can only change that through how others perceive our performance, which we can’t even control.

If we continued to pout, probation would become something worse, but if we put on our “game face” without acknowledging why we were on probation to begin with, we’d also just deepen our own holes.

So, with our defenses down and our egos on the line, we read through our reviews again and asked the people who rated us for their advice. It hurt to hear the candid feedback about why we were reviewed how we were and the fundamental shifts they were asking us to make.

One of us went through the process and realized that these weren’t changes they wanted to make and would prefer to find somewhere that they would be valued for their current traits. The other one also went through the process but instead realized that these were changes they’d have to make to succeed anywhere and were grateful to have the opportunity to pivot now.

Both of us are happy with our decisions and are doing better for it, but had we not embraced the suck and really dug into why we were in a situation that led to such low morale and what we could learn from it, we would’ve been left miserable months later when we could’ve been left thinking “did I leave because I wasn’t good enough, or because I didn’t want to be there” or “I left but the same problem is coming up again”.

Sometimes, you don’t have time to rally support. Sometimes, you’re too panicked to even ask for help… “what if they think I’m weird, or stupid, or a cry baby?” Sometimes, you want to embrace the suck but all you see is more suck and that, well, sucks.

This is going to sound zen, so bear with me, but sometimes the way out of low morale isn’t to try and get out at all; it’s to accept what you’re experiencing, experience it, and then understand what makes it suck for you.

I say “what makes it suck for you” because it is your own internal state that will decide how a situation feels. Situations themselves can’t hurt you. I heard a story of a friend who broke up with someone and was crying to someone about it, to which that person said, “Congrats!” “Congrats, what do you mean, I’m crying!” “Yeah, but didn’t you break up because that person wasn’t good for you? Congrats on being free! I have gone through breakups too and have been delighted each time.” He was focusing on finding his future partner, my friend was focused on the pain of losing this potential partner. Two people, similar situations, radically different mindsets and responses.

On a more professional note, here’s an example of needing to just breathe and not do anything about the low morale, just work through it. Someone told me about a project they were on where they felt like the worst performer on the team. They didn’t enjoy the work they were doing, and definitely didn’t enjoy thinking they were worse at it than those around them. They spoke to their manager about it and was told “I hear you, but you can’t control if you’re worse or better, you can just do your best. And you’re not going to do your best feeling like that. Take a deep breath and just focus on doing the work, worry about the anxiety after.”

Similarly, after pivoting to PE I spoke to my OfficeHours coach about the imposter syndrome I was feeling at work and how paralyzed and down I felt most days because of it. Like my friend’s manager, I was told “The anxiety you’re feeling makes sense. This is a highly competitive environment and you do come from a different background. Learn from that. But the anxiety itself isn’t serving you, if anything, it’s making your ability to perform in this highly competitive environment worse. Breathe. Soothe the anxiety. Let the low pass. And then see why the low was there and do something about it.”

To help with this, I personally have taken a meditation course (completely free – audios here, epub files here) and regularly meet with my therapist, on top of my network of friends, mentors, and coaches.

Sometimes, there’s no problem to fix and nothing to learn. There’s just a low. That’s when it’s important to breathe until either the low goes away or you’re left with the ability to start reflecting about why you feel low in a situation where someone else might say “congrats” (and for me, journalling and therapy both normally really help with the reflection, processing, and healing part).