Lessons I’ve learned: My “non-traditional” path to HBS and to private equity 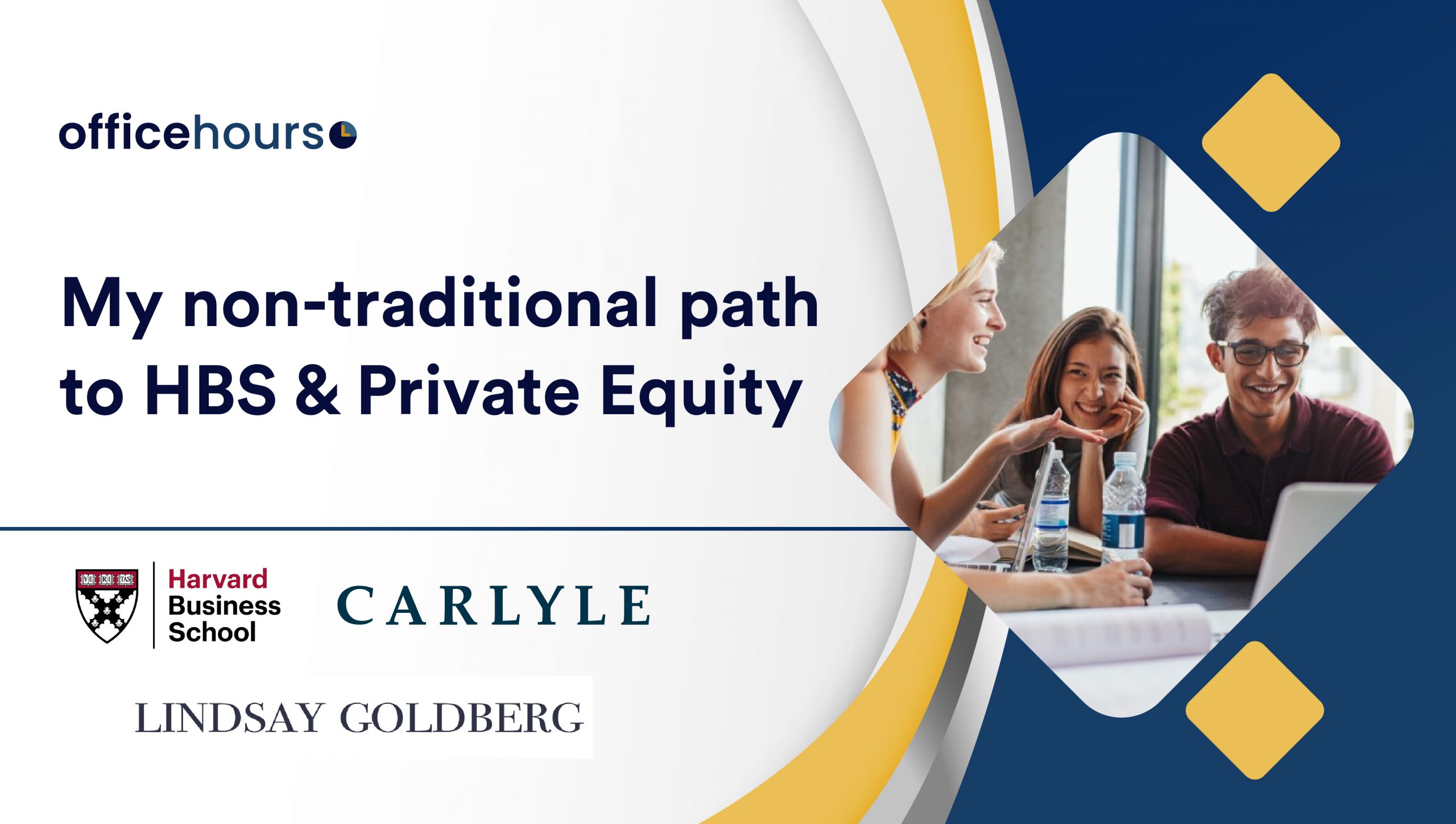 In my last post, “Why no career move is detrimental”, I discussed why not receiving your ideal job offer is not the end of the world. In my own journey, I faced rejections from “the perfect job” more than once. I also made a number of seemingly unconventional career choices that at times left me worried about my future. There were bumps in the road, and I was also very much impacted by economic events which resulted in recruiting challenges very similar to those candidates today are facing. I joined an oil & gas banking group right before one of the largest ever collapses in energy prices, a year later moved to the UK right in time for the referendum, and finally, found myself mid-recruiting during the height of the pandemic.

I speak to so many candidates who are worried about an upcoming recession, terrified of ongoing rounds of firings, and stressed that they no longer will be able to find their desired roles. While I unfortunately can’t promise you that your fears won’t be realized, I can promise you that it won’t matter in the long-run. At least, if you make the best of your circumstances, it won’t have to. In sharing parts of my own story, and the lessons that I learned, I hope you will see that there are so many different ways toward achieving your long-term goals. Spoiler: It all worked out (and better than I could have planned for!).

Lesson #1: Be Creative and Be Relentless

After graduating with a finance major, I joined the oil & gas group of the bulge bracket investment bank I had spent my junior summer interning with. My internship was fantastic – the team was super busy and deal volumes were at an all time high. My “plan” was to get a few deals done and move to private equity before I hit the two year mark. Just about all of the previous analysts in my group had gotten top offers, and plenty had left after only a year. What I didn’t anticipate, however, was a ~60% plunge in the price of crude oil in my first 6-months on the desk. I started my job in the summer of 2014, when WTI was at almost $110 / barrel. By January of 2015, prices dropped to less than $45 / barrel. Needless to say, I didn’t quite get the sort of deal experience I was hoping for. To make matters worse, I realized that I didn’t even really like working in energy – I found myself miserable time and time again whilst trying to wrap my head around some nuance like MLP tax structures or NAV modelling. In a lot of ways, my very first career decision out of college looked like a complete failure.

I was not at all thrilled about the situation, and I was terrified that I had messed up the entirety of my career, but I tried to do what I could with the circumstance I was in. There was no way I would get a private equity job in a generalist group out of NYC, and trying to lateral to another bank seemed pointless. So instead, I approached my group-head and asked him for an internal transfer. My family lived in Paris at the time and I had been flirting with the idea of spending some time back in Europe, so I asked to be considered for a move to London. My team was open to the idea of this, but the London office came back and told me that there were no open analyst spots. At this point, I was set on making the move happen and wasn’t going to take no for an answer. I used my one week of vacation to fly to the UK, set up meetings with as many groups as possible, and continued to follow up relentlessly once back in Houston. Eventually, the Consumer & Retail team had a spot open up after an analyst quit, and they called to offer me the job. A few months of logistics later, I was on a one-way flight to Heathrow.

Lesson #2: Your “Weaknesses” are Just Strengths in Disguise

London was great and I enjoyed working in consumer & retail, but my goal had always been to move to the buyside. What I didn’t account for this time around was how difficult it would be to make that move whilst under a company sponsored visa. I also had underestimated how much of a disadvantage my lack of European language skills would be. The economy wasn’t great in Europe to begin with, but things only got worse. Exactly 12-months after my move to London, the UK voted to exit the European Union, driving the pound to a 30-year low. Yet again, I questioned everything as I faced the tower of cards that were stacked against me. Job prospects looked bleak, and I was also now making essentially 30% less doing the exact same job in a significantly more expensive city. Career decision number two could also have been deemed a failure.

I knew I probably wasn’t the most competitive buyside candidate – but I also knew that I had some skills which I could leverage. My international upbringing played in my favor and gave me an edge that other banking analysts generally didn’t have. I ultimately accepted an offer with a family office that primarily invested in emerging markets, but also had some exposure to the U.S. – a firm which found my middle-eastern roots and American experience compelling. This wasn’t something I identified day one and planned my whole search around, but whilst speaking with recruiters and interviewing for certain positions, I did realize that my “weaknesses” were actually strengths for the likes of developmental finance or emerging markets investing. Equipped with that knowledge, I was then able to focus on more effectively highlighting those attributes of my profile.

I didn’t actively search for a new role until a few years later, at which point my fund had began to alter their strategy in ways that no longer lined up with what I was hoping to do long-term. I faced the same familiar difficulties around visa-status and language skills, but was more experienced and felt like I was getting close to the offer stage with a few different opportunities. Just in time for…the pandemic. Over-night, the world shut down around me and every interview process I was in put their candidates on hold. As the months went on, my stress only compounded and I began to, again, question the career decisions I had made up to this point. I had anticipated moving jobs was never going to be easy, and had taken the GMAT the year before in case business school would be a good option at some point in the future. I also knew that my emerging markets experience, whilst potentially less translatable to buyout PE, would differentiate me in the eyes of the admissions board.

COVID-19 and its economic implications did not seem like they would end anytime soon, so I used the slow-down in interviews as a chance to explore business school options. I never did stop recruiting though, as I wasn’t entirely sure what the next chapter was going to look like. After 6 brutal months of interviews and applications, things finally started to look up. I received and accepted an offer to join Carlyle’s opportunistic credit team, and a few weeks later got word of my acceptance to HBS. If you had told me in January of 2020 that either of these two things were going to happen, I’d probably have laughed at you.

Schedule a call with this coach here: https://app.getofficehours.com/top-coaches